Now that the Olympics has come and gone for another 4 years we would like to take a moment to congratulate all of our Monash students who competed at the games in Rio. This year saw 10 athletes compete in a wide range of sports from Taekwondo to Rowing, seeing Monash University well represented.

Archery
Alec Potts (Bachelor of Business)
Alec competed in both the Men's Individual and Team events for Archery. The Individual event saw Alec just missing out in advancing to the next stage losing to Bernardo Oliveira from Brazil 6-4 in the 1/32 eliminations. The team event saw Australia win against France (5-3) in the quarterfinals and lose to the Republic of Korea (6-0) before moving onto the bronze medal match against China. Australia won 6-2 against China seeing Australia, and Alec, win the bronze medal.

Athletics
Linden Hall (Master of Dietetics) - 1500m
Linden put in a strong effort in the women's 1500m coming 4th in her heat with a fantastic time of 4:11.75. Unfortunately she missed out on a finals spot coming 8th in her semi-final with a time of 4:05.81.

Badminton
Mathew Chau (Bachelor of Engineering/Bachelor of Commerce) - Men's Doubles
Sawan Seasinghe (Bachelor of Business Information Systems) - Men's Doubles
The dynamic duo of Mathew and Sawan teamed up together to compete in the Men's doubles. Unfortunately they were knocked out of the preliminary rounds losing to Chinese Taipei (2-0), Russian Federation (2-0), and Republic of Korea (2-0).

Leanne Choo (Bachelor of Interior Architecture) - Mixed Doubles
Leanne played exceptionally in the Mixed Double's Badminton but unfortunately was knocked out in the Group Play Stage, losing to Indonesia (2-0), Malaysia (2-0), and Thailand (2-0).

Shooting
Laetisha Scanlan (Bachelor of Communications) - Trap
Laetisha was off to a strong start in the Women's Trap Shooting coming first in the qualification round with a score of 70. Unfortunately she just missed out on a spot in the final coming in 5th with a score of 10 in the semi final. We also loved Laetisha's pre games warm up with Hamish and Andy!

Table Tennis
Heming Hu (Bachelor of Science/Bachelor of Education)
Heming played valiantly but was unfortunately knocked out in the first round losing to Hong Kong, China 3-0

Well done to everyone who competed in Rio you all did a fantastic job, and congratulations to all for representing Monash and Australia with pride! 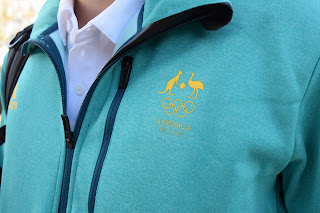 With the MS 24 Hour Mega Swim approaching quickly we have compiled some helpful tips for you and your team while you complete the 24 hour challenge to help raise much needed funds for multiple sclerosis.

Swimming
When it comes to the actual event the main rule is someone from your team must be in the water at all times. A helpful tip may be to create a swimming roster to make sure everyone knows when they are swimming. Also make sure that each swimmer is swimming for a reasonable amount of time they feel comfortable with and can adequately swim to ensure everyone can complete they event safely (we don't want anyone passing out or collapsing). A very important tip is to make sure you get plenty of rest and make sure you stay hydrated with fresh and non-chlorinated water!

Fundraising
The main aspect of this event is fundraising money to help people with multiple sclerosis. Firstly, create a manageable target of how much you want to raise. Next, start out your fundraising by asking friends or family if they would be happy to donate any amount possible to the cause. If you want to get creative in trying to raise as much as possible than try something like a fundraising event such as a morning tea, sausage sizzle or trivia night. Get creative and motivated to raise those funds!

See some more ideas about how to go about fundraising.

Lastly, make sure you have fun and encourage everyone participating! Not only is this a fundraising event but it is a fun event to push yourself and enjoy the company of friends, family and meet new people.

To register or donate visit the Mega Swim page. 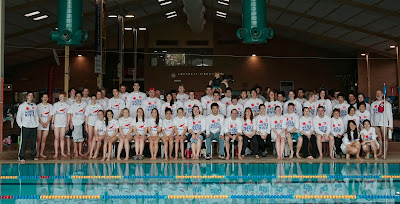 This year Monash Sport is proud to be holding our biggest ever MS 24 Hour Mega Swim event at the Doug Ellis Swimming Pool. The Mega Swim is a fundraising event that aims to help raise as much money and awareness as possible to help support people living with multiple sclerosis via Go for Gold Scholarships. Multiple Sclerosis is a chronic and often debilitating disease that strikes Australians in the prime of their lives with the average age of diagnosis being only 30 years of age.

This year we are aiming to raise over $20,000 for MS, with teams (with 15 participants or less) who raise the most money and swim the longest distance winning a prize.

The atmosphere of the event should be electric which will make for a super fun event. So get your friends involved, make a team, and push yourself to the limits for a great cause! 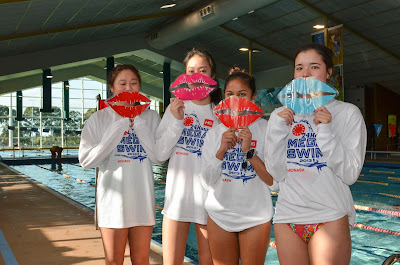 
Thousands of members from the Monash community ventured out into the cold for Let It Glow Monash Friday 12 August, the final event for Winterfest 2016.

Monash University students, staff, alumni and their families didn't allow the chilly weather to deter them, as Monash Sport opened its Clayton campus facilities for a night of neon lights and fun activities. 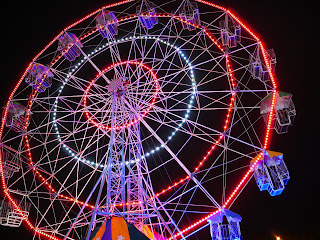 The feature events of Let It Glow Monash were the Light up the Night fun run/walk, and fireworks which lit up the night sky to the delight of thousands of onlookers. The newly constructed Monash Circuit track was officially opened, as members of the Monash community ran and walked around the track waving multicoloured glow sticks. 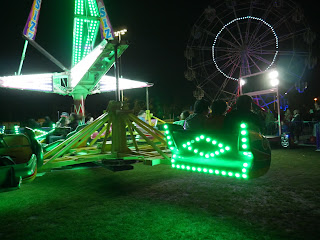 Monash Sport's Clayton ovals were transformed into a theme park, with a jumping castle, big slide, Cha Cha and Ferris Wheel running all night at no cost. Fire Twirlers and other entertainers roamed the grounds, while a number of food trucks were present to serve the hungry festival goers. 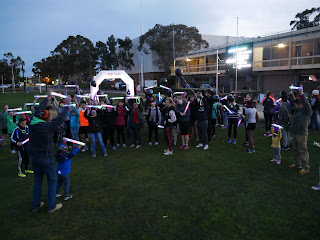 Fun for the whole family was on offer, with a kids section including cool activities and screenings of Ice Age and Happy Feet. The Monash Blues Under 19's side played under lights on Frearson Oval, however despite a healthy crowd of supporters the Blues fell short by 12 points. 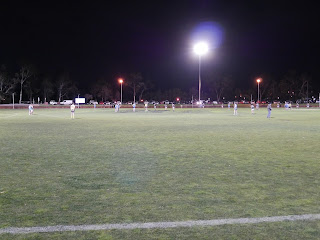 If you would like to see the highlights from Let It Glow Monash, click on the short video at the top of the page or visit the photo album on Monash Sport's Facebook page here.
By John Monash
Email ThisBlogThis!Share to TwitterShare to FacebookShare to Pinterest

Feeling a bit hungry after your workout or social sport games? Well we have some good news for you. Caulfield have now opened a new food retail outlet, known as Graze on the Green, and will now have extended trading hours!

Retailers in the new food outlet include, Sumo Salad, Boost Juice, Zambero and Flipboard Cafe. These retailers will be open 7am to 8pm Monday through Friday and 9am to 3pm Saturdays. Along with these new retailers, Standing Room, located just outside C Building, will also have extended trading hours on Saturday from 8am to 2pm.

So fear not on missing out on these delicious meals after you leave Monash Sport, with extended trading hours you will never go hungry after your workouts and games.

If you are feeling a bit hungry after your workouts or social sport games then we have some good news for you!

With the opening of the new retailers in the Campus Centre, including the newly opened Northern Plaza, trading hours have now been extended (now including weekends) so you can get in a late feed after you leave Monash Sport.

PapaRich is also opening soon on August 15 and will have a wealth of delicious meals to choose from. Also, for the first 3 days of opening get 50% off!

Make sure to check out all the new offerings while you replenish your energy after a hard workout and game!

Facing your fears - a motivational story

When Susan Berg was 15 years old she encountered something many of us will never have to go through, losing her family in one tragic accident. While out on a boat trip with her parents and brother their boat suddenly sank. Susan, desperate and cold, swam ahead in the darkness to try and find help for her and her family. After 4 hours of struggling through rough seas in the dark Susan finally made it ashore. Her family tragically did not.


Since that boating accident that claimed her family's lives 30 years ago Susan has fiercely avoided both swimming and open water. But now, as part of her journey of self-healing, Susan is ready to take on her fears by swimming the world's largest open water event- the Lorne Pier to Pub- in January 2017.

Susan has started her training (and making great progress) for the event at Monash Sport; as a participant of Swim Fit at the Doug Ellis Swimming Pool, to help mentally and physically prepare herself to take on her greatest fears and help raise money for the McAuley Community Services for Women.

Not only is this inspirational journey about Susan taking on her biggest fears, but also to help raise $25,000 for the McAuley Community Services for Women, a Victorian not-for-profit organisation that helps women and children who are the victims of family violence and homelessness.

We are encouraging everyone to get behind Susan and show your support for an inspirational woman. Well done Susan, keep up the great work!

For more information on Susan and her amazing journey visit her website or click here to help raise the much needed funds for the McAuley Community Services For Women. 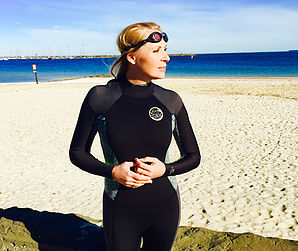 Light Up the Night

If there is only one event at WinterFest you have to attend, it's the Light Up the Night Fun Walk/Run on Friday 12 August. In conjunction with the grand opening of the new Monash Tan, we're hosting a fun walk/run under the night sky in an array of colour and light, with the new circuit being lit up with colourful light.

To help light up the night even more, because honestly, who doesn't love colour and light, participants will also have the chance to be decked out in glow-sticks and neon paint. If having fun amongst a sea of light and neon-colour as you run, walk, skip, or even cartwheel your way to the finish isn't enough, there will also be a DJ pumping all the best music to help keep you going during the walk/run.

Registration for the event opens at 5:30pm, with the walk/run commencing at 6pm. The event will finish at 7pm with an abundance of post event activities to be held, including the spectacular fireworks show and a night footy match featuring our very own Monash Blues.

Entry for the event is $2 each, which will include registration and glow in the dark accessories. Not only is the $2 entry cheap, plus you get free glow in the dark / neon accessories (seriously, who doesn't like free stuff!?), but it will also be helping to shine a light on Youth Homelessness and help bring an end to youths living on the streets.

This is an event for everyone and not to be missed, so get your friends, parents, kids, even your grandma involved.

Register here to join in the fun. 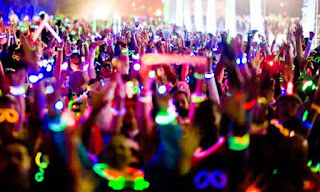