At Clayton campus we are trialing the addition of a new group fitness class to the timetable!

Over the next few weeks we will have a new cycle class (with Nicoletta) on every Monday at 4.30pm. Should this class be well attended we will consider adding it to our Group Fitness Timetable permanently. 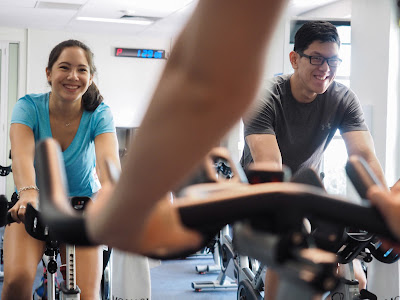 
The 24 Hour Mega Swim, Stride and Spin was held over the weekend at Monash Sport, with over $9,000 raised for people affected by Multiple Sclerosis.

From 10am on Saturday morning to the following Sunday, five teams contributed to raising money for Multiple Sclerosis Australia. There were many tired faces when 10am Sunday arrived, as many participants elected to sleep at the pool over night. However all 52 participants were proud of their achievements while raising money for an excellent cause.

The money raised will go towards financially helping people unable to achieve their goals and dreams due to Multiple Sclerosis, in what MS Australia call Go for Gold scholarships.

Spokesperson for MS Australia Shara Gillahan was thrilled with the efforts shown from all the teams.

"So for the 2015 Monash 24 Hour Mega Swim, Spin and Cycle, you guys have been able to raise over $8,700 and still counting. That's an amazing effort and will help so many recipients of Go for Gold scholarships," she said.

Shara herself was diagnosed with MS five years ago, and after being supported by MS Australia she has joined the organisation to give something back.

"I was diagnosed with MS in 2010, and I was fortunate enough to be a recipient of a Go for Gold scholarship in 2012. And through that it allowed me to achieve my dream of traveling over to Ireland and UK and the US to learn millinery from some of the world's best milliners," she said.

The Mega Spin and Mega Stride were two new additions to the Mega Swim event this year, to give flexibility for those wanting to contribute out of the pool. The Mega Stride consisted of walking or running on a treadmill, while the Mega Spin gave participants the task of riding on a spin bike for 24 hours.

Monash Sport has held five Mega Swim events over the years, with over $100,000 being raised in total.

Donations for the Monash 24 Hour Mega Swim, Mega Spin and Mega Stride will close a month after the event finishes. Follow this link to donate.

Monash University is proud to support National Ride2Work Day - the largest celebration of commuter riding in Australia. Held on 14 October 2015, the day celebrates the benefits of riding to work and brings together the Monash community. It helps people who have never ridden to work before to give it a go, and it allows frequent riders to stay motivated and encourage their workmates to get involved.

Sign up for you local campus event using the links below.

On the day bring your bike or helmet to the event for some free treats including: fruit, muffins, puncture repair kits, coffee cups and water bottles. You can say hello to other cyclists, chat about cycling to Monash, or boast about all of the benefits of cycling like: 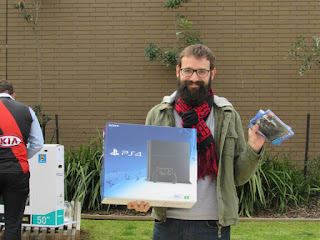 Each year, the Fight Cancer Foundation asks Australians to don their favourite football teams colours, unite and help support the fight against cancer.

For the second year in a row Monash Sport held their all inclusive Footy Colours Day to support the Fight Cancer Foundation. 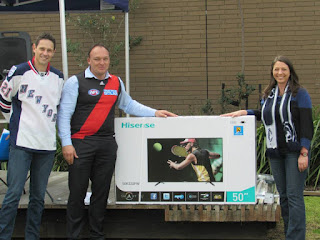 Staff and students ventured out to Monash Sport in spite of the week 8 overload to sample some tasty fares from food trucks, listen to the tunes from our DJ, test their accuracy at hand balling or kicking a footy and check out how high they could jump in the vertical jump test.

Ever the fan favourite, students also spent some time bouncing off each other, the walls, and even off the ground in friendly games of bubble soccer.

Events were also held at Caulfield and Peninsula campus.

The Clayton campus event also offered the perfect opportunity to announce the Winners of our inaugural Footy Tipping Competition. With nearly 1000 people registered the competition from diverse areas of the University, the final draw came down to six participants equally tied for first place, the winner of which was ultimately determined by the margin score.

First place went to Professor Chrishan Samuel from the Pharmacology faculty and was accepted by Dr Barbara Kemp-Harper on his behalf as he was overseas at the time. Professor Chrishan not only became the winner of the first place prize - a 50 inch Full HD Smart LCD TV, but also came first in their faculty's private competition consisting of around 20 people.

Second place went to Saul Block - a Bachelor of Engineering/Bachelor of Commerce student currently completing his penultimate year. Saul won a one year Fitness and Aquatics membership at Monash Sport.

Third prize was won by biochemical Post-Doctoral researcher Dr Laurent Lermusiaux who got to take home a Playstation 4 and a couple of games.

Fourth place went to first year Psychology student Deandra de Krester who was unable to attend and collect her Fitbit Charge HR as she was in a tutorial during the presentations.

A special mention should be made for Professor Edwina Cornish - Provost and Senior Vice-President of Monash University, who was the last to hold an equal tie for first place in points however missed out on a prize by margin.

Well done to all of our nearly 1000 Footy Tipping participants and thanks to all who got involved in our Footy Colours Day celebrations!
By John Monash
Email ThisBlogThis!Share to TwitterShare to FacebookShare to Pinterest 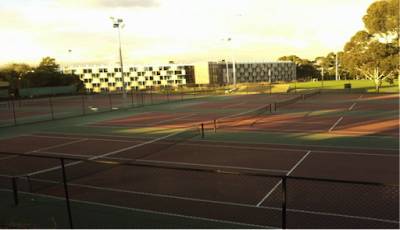 The project will require the Tennis Court precinct to be closed for a period of approximately 9 weeks, from when resurfacing began on 15 September.

The project aims to:

Monash Sport is committed to providing a safe environment for all leisure and aquatic centre users and this essential maintenance forms part of this commitment.

Monash Sport will be communicating updates to staff, members and facility users regarding public access availability throughout the project.

During the project, the Tennis Courts will be closed, and there will be no casual or member access during this time.

It is anticipated that there will be reduced parking (8 bays) in the Doug Ellis Swimming Pool car park throughout the project to enable access to the Works Site (Tennis Courts). We apologize for any inconvenience, but look forward to delivering brand new tennis courts to the Monash University community.
By John Monash
Email ThisBlogThis!Share to TwitterShare to FacebookShare to Pinterest

On Thursday 17 September Monash Sport will be hosting Footy Colours Day, an all inclusive free event for student and staff at Monash in support of the Fight Cancer Foundation. 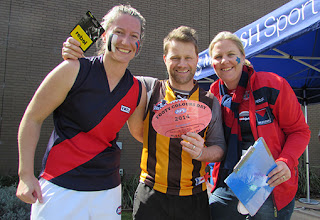 So show your team spirit, come on down and celebrate all things football!

The event will feature activities such as bubble soccer, handball targeting, vertical jumps and more.

Fundraising can be done using this page, we welcome any donation large or small as every little piece helps!

Each campus will be running their own event with Clayton and Peninsula occurring on Thursday 17 September, whilst Caulfield campus will host the event on Wednesday 16 September.

Find out more about the schedule of activities at our event page!
By John Monash
Email ThisBlogThis!Share to TwitterShare to FacebookShare to Pinterest

On Thursday 10 September, Monash University will be holding numerous events for staff and students to coincide with R U OK? Day.
R U OK? Day creates awareness in the community for suicide prevention. Suicide can affect many people's lives, especially family and friends of those who suffer from mental illness. However it can be prevented by simply asking someone meaningfully: "Are you ok?", and having a conversation.
Monash University is a big supporter of R U OK? Day, with numerous events to be held at the Caulfield and Clayton campuses. One little question can make a big difference to those people struggling with life, make sure you ask someone today!
Monash Sport will be hosting free relaxation classes, outdoor sport and informal activities and health checks at Caulfield while at Clayton we will be offering a free Dynamic Yoga group fitness class.

*Those wishing to participate in the Dynamic Yoga must register for a 7 Day Free Trial. Register form can be found here

We are pleased to announce that the variable pool, sauna and steam room are back open again!

As you may be aware, we’ve been undertaking refurbishment projects to improve the variable pool floor, sauna and steam room over the past two months with the following outcomes achieved:
We are pleased to advise that all of these areas will be reopen for operation on Saturday 29 August, 2015. The variable pool will reopen at a fixed depth of 1m and Monash Sport is continuing to work with contract partners on the operation of the movable floor.
We thank you for your patience and hope you enjoy the refurbished facilities.
Please call the aquatic service desk with any questions on 9905 4115.
By John Monash
Email ThisBlogThis!Share to TwitterShare to FacebookShare to Pinterest
Newer Posts Older Posts Home
Subscribe to: Posts (Atom)